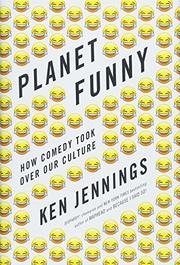 How Comedy Took Over Our Culture

In his second departure from quiz-show fare, Jennings (Because I Said So!: The Truth Behind the Myths, Tales, and Warnings Every Generation Passes Down to Its Kids, 2012, etc.) tracks the development of an abiding personal passion: comedy.

The author assembles a concise but thorough history of the sweeping trends in American humor that have led to our present situation, in which comedy serves as the cultural lingua franca, so central to our ways of interacting, consuming, and producing that it is taken for granted. In this groundswell of “laughterhood,” Jennings hears the rumblings of a not-so-distant time when we will reach “peak comedy,” an opinion he shares with Simpsons writer Tim Long: “I don’t think you can go that much faster than people are going now.” Jennings frets over oversaturation and whether the increasingly frenetic pace of comedy (measured in JPM, or jokes per minute) might feed into our widespread anxieties, with a worldwide web of people typing “that’s funny” but never really laughing, too caught up in getting the next joke to pause and develop deeper senses of humor and too busy searching for the laugh to deal with the tragic or the truly serious. In a more hopeful projection, the author sees Twitter exchanges making us all funnier, its circulating joke cycle forming the training wheels for quick thinking, the learnable part of wit. Jennings downplays his fame as a “professional ex-game show contestant” (the winningest champion on Jeopardy! to date, for all the Rip van Winkles out there). A self-professed comedy geek, he switches from the funnyman’s thinking guy to the thinking man’s funny guy depending on whether the comedy or the geek is uppermost. Let us hope that the author has geeked out in some other areas he’d like to share with the class.

This book is full of good sense and meaningful interviews, and it would be difficult to find a smarter or more satisfying treatment of a subject so evanescent and idiosyncratic as comedy.