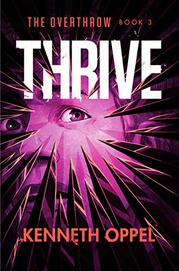 From the Overthrow series, volume 3

This is the moment teens Seth, Anaya, and Petra have both been anticipating and dreading ever since aliens called cryptogens began attempting to colonize the Earth: the chance to defend their planet.

In an earlier volume, Seth, Anaya, and Petra began growing physical characteristics that made them realize they were half alien. Seth has wings, Petra has a tail, and Anaya has fur. They also have the power of telepathy, which Anaya uses to converse with Terra, a cryptogen rebel looking for human allies who could help stop the invasion of Earth. Terra plans to use a virus stored in the three teens’ bodies to disarm the flyers, which are the winged aliens that are both masterminding the invasion and enslaving the other species of cryptogens known as swimmers and runners. But Terra and her allies can’t pull any of this off without the help of Anaya, Seth, and Petra. Although the trio is anxious about their abilities, they don’t have much of a choice—the entire human race is depending on them for salvation. Like its predecessors, this trilogy closer is fast-paced and well structured. Despite its post-apocalyptic setting, the story is fundamentally character driven, and it is incredibly satisfying to watch each protagonist overcome their inner battles within the context of the larger human-alien war. Main characters read as White.

A thrilling conclusion to a beautifully crafted, heart-stopping trilogy.