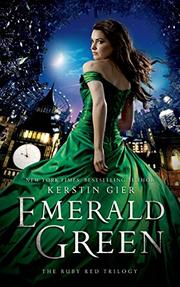 Contemporary teen Gwen confronts romantic heartbreak and shocking secrets about her destiny as part of the time traveling Circle of Twelve in this final volume of the Ruby Red Trilogy, which commences where Sapphire Blue (2012) abruptly ended.

Since discovering she’s the Ruby, the last link in the multigenerational Circle, which is controlled by malevolent Count Saint-Germain, Gwen and fellow time traveler Gideon have undertaken perilous trips to the past. They’ve connected with missing Circle members whose blood samples must be added to a chronograph for the Circle to be complete and a secret prophecy fulfilled. Desperately in love with Gideon, a heartsick Gwen believes he feigned love to manipulate her, but during one of their missions, Gwen receives what should be a mortal wound, and Gideon reveals his true feelings. Together, they learn the count plans to sacrifice Gwen to ensure his own immortality, and Gwen discovers game-changing secrets about her past as she prepares for a final showdown. The vulnerable Gwen continues to narrate in chatty, somewhat self-absorbed banter that’s liberally laced with humor. Gradual unveiling of secrets, blossoming love and suspenseful forays into the past rivet attention.

Ruby Red series fans will not be disappointed with this surprising and romantic finale.