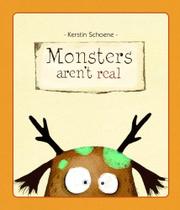 Beaten down by a ubiquitous chorus of denials (see title), a monster suffers an existential crisis.

Surrounded by emphatic claims that it doesn’t even exist, a monster sets out not only to prove the contrary, but to establish its scariness credentials too. Alas, neither blasting the world with graffiti and printed fliers nor rearing up menacingly over a baby in a carriage, children at the barre in a ballet class and other supposedly susceptible victims elicits any response. Juggling some cows attracts attention but not the terrified kind. But the monster’s final despairing surrender—“That’s it! It’s over! I give up! ... /  Monsters aren’t real (sniff)”—triggers an indignant denial of a different sort from a second, smaller but wilder-looking, creature. It takes the first in hand and leads it off, declaring “We’re two big, strong, scary monsters, and we’ll prove it.” In truth, it won’t escape even very young readers that neither is particularly scary-looking. Indeed, the protagonist-monster is depicted in the sparsely detailed cartoon illustrations as a furry, almost cuddly, bearlike hulk with light-blue spots, antlers and comically googly eyes, certain to provoke more giggles than screams.

A lightweight fear-dispeller, without the gun violence that now makes Mercer Mayer’s There’s a Nightmare in My Closet (1968) so discomfiting.