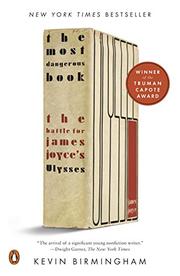 THE MOST DANGEROUS BOOK

The Battle for James Joyce’s Ulysses

Modernism’s “battle against an obsolete civilization,” encapsulated in the struggle to publish one taboo-shattering masterpiece.

In his sharp, well-written debut, Birmingham (History and Literature/Harvard Univ.) reminds us that the artistic experiments of James Joyce (1882-1941) were part of a larger movement to throw off Victorian social, sexual and political shackles. Indeed, authorities in England, Ireland and America were quite sure that Joyce’s shocking fiction was, like the feminists, anarchists, socialists and other reprobates who presumably read it, an attempt to undermine the moral foundations of Western society. Guilty as charged, replied the diverse group that supported the impoverished Joyce as he struggled to write Ulysses while wandering across Europe during and after World War I, plagued by increasingly grim eye problems (described here in gruesome detail). Ezra Pound advocated for Joyce with his literary contacts on both sides of the Atlantic, and Dora Marsden and Harriet Weaver gave him his first break in the English avant-garde magazine The Egoist. American iconoclasts Margaret Anderson and Jane Heap risked punitive fines and jail terms to publish chapters of Ulysses in The Little Review, adopting a defiant stance that dismayed lawyer John Quinn, who had scant sympathy for radicals but thought Joyce was a genius and that his book must be defended. The clandestine edition of Ulysses published in Paris by Sylvia Beach of Shakespeare and Company in 1922 became the identifying badge of cultural insurgents everywhere and the target of confiscation and burnings by censors until Judge John Woolsey’s landmark 1933 decision permitted the novel to be sold in the U.S. and dramatically revised the legal concept of obscenity. Birmingham makes palpable the courage and commitment of the rebels who championed Joyce, but he grants the censors their points of view as well in this absorbing chronicle of a tumultuous time.

Superb cultural history, pulling together many strands of literary, judicial and societal developments into a smoothly woven narrative fabric.