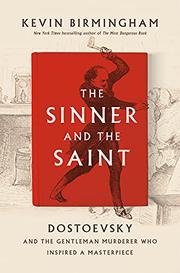 THE SINNER AND THE SAINT

Dostoevsky and the Gentleman Murderer Who Inspired a Masterpiece

A 19th-century true-crime/literary tale in which two lives become enmeshed in evil.

Award-winning literary historian Birmingham elaborates on the trials and travails of Dostoevsky (1821-1881) by interweaving his life with that of notorious French outlaw Pierre Francois Lacenaire (1803-1836), a figure whose “base instincts” fascinated Dostoevsky. Lacenaire, who studied law and wrote poetry, detailed his many grisly crimes—including the murders of a gay man and his mother—in a scandalous memoir. Widely celebrated as a romantic iconoclast, Lacenaire came to represent “the radical artist undermining bourgeois society” and fueled Dostoevsky’s imagination as he wrote Crime and Punishment, with a protagonist whose motivation to kill was a mystery “even to himself.” Dostoevsky set himself the challenge of grappling with the nature of evil by telling “a murderer’s story from the murderer’s perspective.” The trajectory of Dostoevsky’s life is by now familiar: He burst onto the literary scene in 1845 with the publication of Poor Folk, but within a few years, his critical reputation waned and he was drawn into the left-leaning Petrashevsky Circle. Arrested when the czar clamped down on political protest, he was imprisoned for eight months, faced a firing squad, and was pardoned at the last minute and sent into exile in Siberia. There, he sought out stories of his fellow convicts, including murderers; he was transfixed by their renderings of their crimes. Bedeviled by epileptic seizures, a gambling addiction, and overwhelming debt, he made an “ill-fated marriage,” suffered a doomed love affair, and found himself, at the age of 43, owing 15,000 rubles—some incurred when he took on his late brother’s debts, most because of his gambling losses. Drawing on his addiction for The Gambler, he exposed the irrationality and “fantasy of the power of daring” involved in roulette. Birmingham conveys in vibrant detail Dostoevsky’s literary aspirations, struggles to publish, and tumultuous world of “angels and demons.”

Prodigious research enlivens a vigorous reappraisal of the writer’s life.