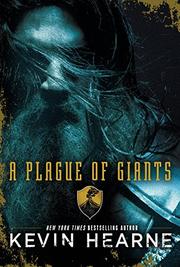 A PLAGUE OF GIANTS

From the The Seven Kennings series, volume 1

The author of Besieged (2017, etc.), kicks off a new doorstopper fantasy trilogy in which a peaceful continent suffers coincidental invasions by different giant races.

In this convincingly realized world, most races have their own particular magic endowment, or “kenning,” whose rites of passage few postulants survive; those that do learn that using their power overmuch causes rapid physical aging. A huge volcanic explosion drives the 12-foot-tall Hathrim (kenning: fire) from their homeland. Their leader, Gorin Mogen, long ago laid plans to illegally build a new city in the unoccupied forests of Ghurana Nent—a move neighboring Forn (kenning: plants) refuse to countenance. The Nentians themselves, preoccupied with internecine political struggles, have no kenning and can bring only armies to oppose the invaders. Until, that is, young Abhi survives an attack by wild animals and discovers he’s found the sixth kenning. A second race, meanwhile, called Bone Giants for the strange armor they wear, invades Bryn (water). They speak an unknown language, until Kaurian (air) scholar Gondel Vedd learns from a Bone Giant captive that his race seeks the (unknown) seventh kenning, insisting that the seventh will defeat the other six. All this is sturdily constructed and exceptionally well thought out, though don’t expect great characters. Hearne, totally unnecessarily, frames the entire narrative as a performance by Fintan, a Raelech (earth) bard personally involved in the action but distrusted by many, whose kenning enables him to take on the semblance of each actor in the drama. Dervan, a scribe writing it all down, provides still another entanglement with his own involved personal life. It’s all vividly described, moves briskly, and features a splendid climax that resolves the main issue while leaving plenty still to come. Most intriguing of all are the ways the various kennings interact, reminiscent of Fred Saberhagen’s Lost Swords yarns.

A genuine page-turner: dependable entertainment with no claims to profundity.