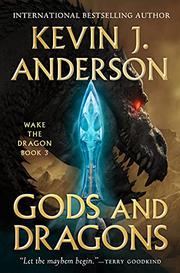 The concluding volume of Anderson’s Wake the Dragon trilogy wraps up the epic fantasy tale chronicling a grand-scale war between nations, races, and even family members that could raise a mythical creature and destroy the world.

As the novel opens, hatred and resentments that have been smoldering for thousands of years are finally igniting. The three kingdoms—led by the newly crowned but unbalanced Konag Mandan—are going to war against the nation of Ishara. Adan Starfall, king of Suderra, and Kollanan, king of Norterra, understand that Ishara isn’t the three kingdoms' biggest worry—that would be the wreths, a race of magical humanoid creatures who believe their ultimate destiny is to awaken, and slay, the great dragon Ossus so that the god Kur can remake the world. Attempting to kill Ossus would require the wreths to wake the monstrosity from its slumber underneath a mountain range—and waking it could not only remake the world, but destroy it. Adan and Kollanan are also aware that dethroning Mandan is of utmost importance in stopping an unwanted war with Ishara. In Ishara, a power-hungry priest named Klovus has grabbed control after attempting to kill Empra Iluris, the nation’s spiritual leader. Barely alive, and hidden away, Iluris must somehow win back her people and country. Meanwhile, Koru, queen of the frostwreths, plots to kill the sandwreth queen in order to unite all wreths before waking the dragon….Although the narrative—parceled out in the form of multiple storylines from a diversity of characters—is a bit unwieldy in the opening chapters, those storylines slowly converge and intertwine, propelling the grand-scale action forward at what turns out to be a relentless pace. The numerous threads eventually meet in an earth-shattering bloodbath of a final conflict that will have fans of George R.R. Martin’s A Song of Ice and Fire standing up and applauding.

Shelf-bending fantasy that is action-packed, intricately plotted, and breakneck paced.