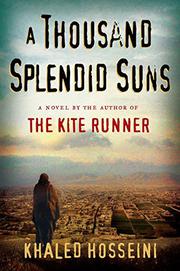 This Afghan-American author follows his debut (The Kite Runner, 2003) with a fine risk-taking novel about two victimized but courageous Afghan women.

Mariam is a bastard. Her mother was a housekeeper for a rich businessman in Herat, Afghanistan, until he impregnated and banished her. Mariam’s childhood ended abruptly when her mother hanged herself. Her father then married off the 15-year-old to Rasheed, a 40ish shoemaker in Kabul, hundreds of miles away. Rasheed is a deeply conventional man who insists that Mariam wear a burqa, though many women are going uncovered (it’s 1974). Mariam lives in fear of him, especially after numerous miscarriages. In 1987, the story switches to a neighbor, nine-year-old Laila, her playmate Tariq and her parents. It’s the eighth year of Soviet occupation—bad for the nation, but good for women, who are granted unprecedented freedoms. Kabul’s true suffering begins in 1992. The Soviets have gone, and rival warlords are tearing the city apart. Before he leaves for Pakistan, Tariq and Laila make love; soon after, her parents are killed by a rocket. The two storylines merge when Rasheed and Mariam shelter the solitary Laila. Rasheed has his own agenda; the 14-year-old will become his second wife, over Mariam’s objections, and give him an heir, but to his disgust Laila has a daughter, Aziza; in time, he’ll realize Tariq is the father. The heart of the novel is the gradual bonding between the girl-mother and the much older woman. Rasheed grows increasingly hostile, even frenzied, after an escape by the women is foiled. Relief comes when Laila gives birth to a boy, but it’s short-lived. The Taliban are in control; women must stay home; Rasheed loses his business; they have no food; Aziza is sent to an orphanage. The dramatic final section includes a murder and an execution. Despite all the pain and heartbreak, the novel is never depressing; Hosseini barrels through each grim development unflinchingly, seeking illumination.

Another artistic triumph, and surefire bestseller, for this fearless writer.