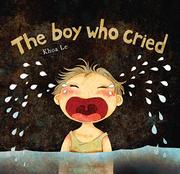 THE BOY WHO CRIED

While some stories send the message that it’s OK for boys to cry, the pale-skinned boy in this picture book needs no such assurance. He cries freely, often, and at the slightest provocation; what he needs is help achieving emotional regulation. Fed up with his tantrum over not getting a toy he wanted while out with his mother, Billy’s parents send him to his room, where he weeps and wails, with only his cat to comfort him. Before he falls asleep his mother says that his “tears have flooded the house up to my ankles!”; his father says the flood has reached his knees. Text and art suggest that readers should accept this literally, but readers may wonder whether it is in fact figurative speech that then provokes Billy’s dream of being adrift in a sea of his own tears. Ultimately Tubbs the cat saves the day by drinking down all those tears, then sending Billy falling back into wakefulness and out of his dream. He immediately finds his parents, lesson learned: “while it’s okay to cry sometimes, throwing a tantrum only causes a flood of problems!” This moralistic conclusion offers no practical strategies for readers coming to the book with similar emotional issues. Le’s illustrations feature fine, black outlines and rich colors set on backgrounds that suggest mottled textures.

A message-driven text at odds with the art’s fantasy and whimsy.