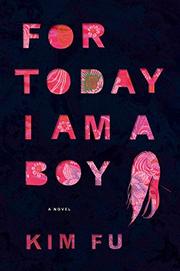 FOR TODAY I AM A BOY

A young man wrestles with gender expectations and his own gender identity in this quietly forceful debut from the Seattle-based author.

Growing up in exurban Ontario, Peter was always the outlier, preferring his three sisters’ girlish behavior over that of his rough-and-tumble male classmates. But his attempts to push his boyishness aside—cooking while wearing a much-loved apron, for instance—incur the wrath of his father, a conservative Chinese immigrant. As his sisters move away, Peter fends for himself in Montreal, taking odd restaurant jobs that give him a small supportive tribe and an opportunity to make sense of his sexuality. While the book has its share of clashes with bigotry, its strength is in its interiority: Fu subtly and poetically evokes the intensity of need her narrator feels to become female. (“What would turn me into them?” Peter thinks, watching a group of women at a nightclub. “Could I peel it all off their faces and bodies with a paint trowel and spread it over my surface?”) Peter’s gender anxiety inevitably leads him down frustrating paths, such as one affair with a middle-aged woman whose domination turns abusive and another with a woman who’s futilely trying to submerge her lesbianism through an ex-gay ministry. Yet Fu is skilled at capturing feelings of rootlessness that go beyond gender, encompassing Peter's immigrant-son status and distance from his family. All of Peter’s emotional baggage makes the novel tonally somber, but Peter’s search for a sense of normalcy—to finally become his female self—has a redemptive trajectory that feels fully earned.

A study of transexuality that’s shot through with melancholy while capturing the bliss of discovering one’s sexual self.