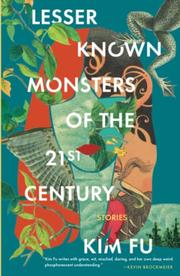 It’s worth mentioning this from the outset: The title of Fu’s latest book is not a metaphor. In the pages of this collection, readers will discover a sea monster more aptly described as “an amalgamation of brainless multicellular organisms”; a sinister doll that once belonged to a family beset by tragedy; and a being with a hood that pours out sleep-inducing sand. This book will likely resonate with readers of Karen Russell and Ben Loory; like them, Fu is equally at home chronicling bizarre events and pondering her characters’ inner lives. “June Bugs,” for instance, follows the travails of Martha, a woman who moves to a new place abounding with an uncanny number of bugs. Fu explores the circumstances of how Martha came to live there, including the way an earlier relationship curdled into something toxic and abusive; by the denouement, the story has arrived at a phantasmagorical place, but Martha’s challenges in life and work are what endure. Some of the stories venture fully into the speculative realm, such as “Pre-Simulation Consultation XF007867,” which is told entirely through dialogue between a customer and operator of a futuristic service that creates realistic simulations of the user's fantasies, exploring questions of memory and reality, and “Twenty Hours,” in which a couple pays for a service that allows them to murder one another repeatedly. Violence, trauma, and intimacy come to the foreground in many of these stories, including “#ClimbingNation,” about a memorial service for a man who died while climbing. Even here, in a more realistic mode, Fu addresses questions of technology and community with grace and subtlety.

A powerful collection that demonstrates Fu’s range and skill.