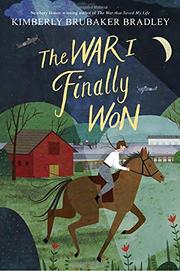 THE WAR I FINALLY WON

Ada returns in this sequel to Newbery Honor book The War That Saved My Life (2015).

Shortly after the events that closed the last book, a successful surgery means overjoyed 11-year-old, white Ada no longer has a clubfoot. She can walk, run, and ride relatively pain-free, but pain returns in a different way: Ada’s abusive birth mother has been killed in an air raid. Enough back story is provided that readers new to Ada’s story won’t be lost. Patient Susan, providing a home to Ada and her little brother, Jamie, during the Blitz, becomes their legal guardian, but Ada, damaged by 10 years of abuse, doesn’t ever feel safe. Living in the midst of a world war only adds to Ada’s constant worries, and from blackout screens to rations, the stress and strain felt in everyday Kent during World War II is plain. But Ada finds comfort in her horse, Butter, and her family, which grows to include privileged Lady Thorton and Ruth, a teenage, Jewish German refugee. Ada’s struggles with her trauma are portrayed with such incredible nuance and heart-wrenching realism that readers are sure to empathize deeply and revel in the joy of watching thoughtful, introspective Ada heal and grow. When tragedy strikes, all suffer, but Ada is able to help another in greater anguish than herself thanks to lessons from her own painful past.

Thoughtful, brave, true, and wise beyond her years, Ada is for the ages—as is this book. Wonderful.