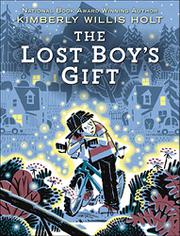 The dull and seemingly ordinary neighborhood in which Daniel fetches up with his newly divorced mom turns out to be anything but.

Daniel’s first impressions of While-a-Way Lane aren’t good, as most of the neighbors are away for spring break, and he’s already in a dark, missing-his-dad mood. But then he spots his next-door neighbor, an older lady named Tilda Butter, apparently talking to the air. Had he looked a bit closer, he would have seen her actually in conversation with a small snake named Isadora. Tilda is very good at looking closer, and as her third-person chapters tend to be much longer than Daniel’s, it’s largely through her eyes and memories that readers will see the wonders of While-a-Way Lane, magical and otherwise, unfold. Wondrous things that happen to Daniel include an exciting encounter with squirrels in Tilda’s attic, landing a role as Lost Boy No. 8 in a school production of Peter Pan (his favorite book), and being followed home one evening by a cloud of fireflies. In Tilda’s view, everyone has a “gift” (hers happens to be talking to animals), and though on the surface Daniel remains rather unappealingly sullen and unobservant until near the end, he ultimately rewards her faith in a way that adds further buoyancy to the upbeat finish. Both Bean’s map and his chapter-head vignettes themselves reward closer looks. The cast defaults to white.

After Daniel’s experiences, readers will want to move there too.