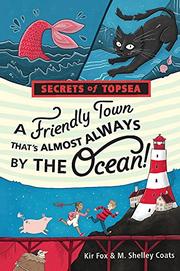 A FRIENDLY TOWN THAT'S ALMOST ALWAYS BY THE OCEAN!

From the Secrets of Topsea series, volume 1

A fifth-grader struggles to fit in after he and his recently widowed mother move to a decidedly oddball new town.

As if the seemingly infinite pier, the lighthouse in the middle of town, and the beach teeming with enigmatic cats aren’t strange enough, Davy Jones discovers that his school locker has been relocated to the deep end of the swimming pool, his lunchtime fries are delivered by a “spudzooka,” and no one seems to be able to get his name right. On the other hand, his classmates welcome him, and in next to no time he’s breaking into an abandoned arcade to play pinball against a ghost, helping track down a pet pig gone missing on Gravity Maintenance Day, and like adventures that, often as not, take sinister swerves before edging back to the merely peculiar. Point-of-view duties pass freely from character to character, and chapters are punctuated with extracts from the Topsea School Gazette (“Today’s Seaweed Level: Medium-high and feisty”), bulletins on such topics as the safe handling of rubber ducks, and background notes on, for instance, the five local seasons, giving the narrative a pleasantly loose-jointed feel. Davy presents as white, but several other central cast members are specifically described as dark- or light-skinned and are so depicted in the frequent line drawings; one has two moms.

A deft mix of chills and chuckles, not quite as sideways as Wayside School but in the same district.