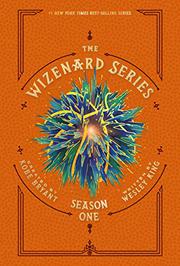 From the Wizenard series, volume 2

This season isn’t starting well for the West Bottom Badgers, and it’s especially hard for one of the players.

Reggie is stuck on the bench. His basketball game is not improving, and he can’t see how he will ever make it to actually play as a true team member. Even though it was years ago, the loss of his parents weighs him down, as he believes they were murdered by the tyrannical President Talin. His parents left behind a mysterious box with a cryptic note inside along with a book full of metaphysical writing that he thinks must hold the secrets of grana—magic. This book picks up from the magical adventures Reggie’s basketball team experienced at an unusual basketball camp led by coach Rolabi Wizenard in the first installment, Training Camp (2019). While Reggie struggles to understand grana, Reggie’s grandmother and younger sister urge him to move on from his grief. Though things get worse before they get better for him on the court, Reggie’s teammates believe he is more than just a benchwarmer. Even as he struggles, the evident, ever present backstory of the larger world events looms vaguely over this slow-paced, oftentimes confusing story. If the plot is often unclear, the emphasis on the values of persistence and discipline is not, points hammered home in each chapter epigraph. Reggie is black, and his teammates are mostly kids of color.

Readers are better off leaving this muddled fantasy aside.