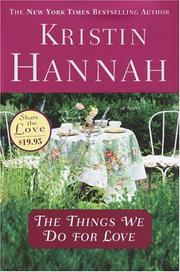 THE THINGS WE DO FOR LOVE

Angie Malone, the youngest of a big, warm Italian-American family, returns to her Pacific Northwest hometown to wrestle with various midlife disappointments: her divorce, Papa’s death, a downturn in business at the family restaurant, and, above all, her childlessness. After several miscarriages, she, a successful ad exec, and husband Conlan, a reporter, befriended a pregnant young girl and planned to adopt her baby—and then the birth mother changed her mind. Angie and Conlan drifted apart and soon found they just didn’t love each other anymore. Metaphorically speaking, “her need for a child had been a high tide, an overwhelming force that drowned them. A year ago, she could have kicked to the surface but not now.” Sadder but wiser, Angie goes to work in the struggling family restaurant, bickering with Mama over updating the menu and replacing the ancient waitress. Soon, Angie befriends another young girl, Lauren Ribido, who’s eager to learn and desperately needs a job. Lauren’s family lives on the wrong side of the tracks, and her mother is a promiscuous alcoholic, but Angie knows nothing of this sad story and welcomes Lauren into the DeSaria family circle. The girl listens in, wide-eyed, as the sisters argue and make wisecracks and—gee-whiz—are actually nice to each other. Nothing at all like her relationship with her sluttish mother, who throws Lauren out when boyfriend David, en route to Stanford, gets her pregnant. Will Lauren, who’s just been accepted to USC, let Angie adopt her baby? Well, a bit of a twist at the end keeps things from becoming too predictable.