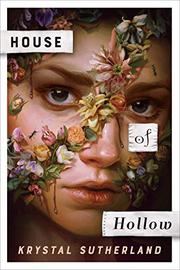 Ten years ago, the three Hollow sisters disappeared from an Edinburgh street while on holiday. A month later, they came back.

When Iris, Vivi, and Grey returned, they couldn’t remember anything of their ordeal. Their dark hair turned white, and their blue eyes became black. They sported identical hook-shaped scars on their necks. Despite their altered appearances, their parents were elated to return home to London with them. However, their father soon began to believe that they were not really his daughters, a conviction that led to his suicide. Since then, the story of now 17-year-old Iris and her older sisters has been like catnip to online sleuths, and their ethereal beauty and uncanny ability to bend people to their wills and intoxicate them with dangerous desire add to their mystique. When Grey, now an internationally famous fashion designer and model, goes missing, Iris and Vivi, with help from Grey’s Korean British boyfriend, Tyler, set out to find her and the truth behind their disappearance. Their search takes on a new urgency when they find a decomposing body blooming with white flowers in Grey’s apartment and they are pursued by a murderous man wearing a horned bull’s skull mask. Iris’ smart and assured narration easily carries a fast-paced story entwining themes of grief and loss with elements of folklore and some very inventive body horror. The pervasive feeling of dread builds to a shocking twist.