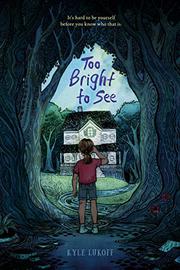 TOO BRIGHT TO SEE

In the wake of his uncle’s death, a transgender boy on the cusp of middle school grapples with grief, friendship, and identity.

Bug lives in a haunted house, but the ghosts of long ago never bothered him before this summer. Then Uncle Roderick, who was gay, passed away, and now the house feels different with just Bug and his mom left. Usually he would spend a month away at camp, the only place he feels connected to a group, but money is tight this year. When a ghost begins following Bug and his dreams turn to nightmares, he searches for answers about who is haunting him and why. As the ghostly mystery unfolds over the course of the summer, Bug struggles with new tension with his best friend, Moira, a girl whose interest in the duo’s reinventing themselves in middle school feels overwhelming and full of expectations he doesn’t know how to meet. This coming-of-age and coming-out story takes a needed departure from other stories about transgender youth by illuminating the perspective of a young person who does not initially know how to identify his discomfort. The narrative pushes against gendered stereotypes about interests like sports and makeup, challenging restricting ideas about gender and self-expression. A chilling, suspenseful ghost story balances the intimate, introspective narrative style. Most of the characters are White, including Bug, his family, and Moira.