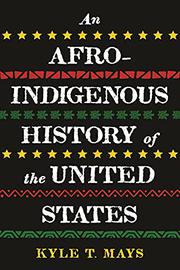 AN AFRO-INDIGENOUS HISTORY OF THE UNITED STATES

A Saginaw Chippewa writer and scholar analyzes the unacknowledged, sometimes fraught relationships between the African American and Indigenous communities.

Many White Americans mistakenly believe that the U.S. is the land of freedom and liberty for all. In this latest installment in the publisher’s ReVisioning American History series, Mays, a UCLA professor of history, counters this notion by examining how American ideals and wealth were built on “enslaved African labor and the expropriation of Indigenous land.” To make his point, the author examines the relationships of Black and Native people to each other and to the U.S. He begins by positing that both groups should be considered Indigenous: one to Africa and the other to the Americas. Slaves were forced to give up tribal identities and assume “Blackness…[as] their condition” just as Natives were forced to assume a generic "red man" identity that marked them as lesser than Whites. This rigid racial hierarchy, along with the institution of slavery, created tensions between Blacks and Natives that became especially apparent during the expansionist phase of American history in the 19th century. For the Cherokee, for example, “race (and antiblackness) became a central component of [their] conceptions of sovereignty.” Both Black and Native communities began articulating their identities in the 20th century through groups like the Society of American Indians and the Universal Negro Improvement Association. But it was not until the civil rights era that Martin Luther King Jr. analyzed both communities together to better understand American racism. Since then, there has been some progress in healing intercommunity rifts, but only radical action can help eradicate them. Though not quite as in-depth as some readers may desire, this book reveals uncomfortable truths about the dehumanizing legacies of both capitalism and colonialism while forging a path of reconciliation between the Black and Native communities. Mays offers a solid entry point for further study.

An enlightening reexamination of American history.