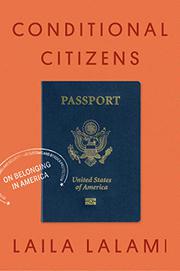 On Belonging in America

The award-winning novelist gathers eight essays that examine the meaning of citizenship in 21st-century America.

Drawing on history, politics, and her own personal experience, Lalami, a creative writing professor and American Book Award winner, explores the “contradictions between doctrine and reality” that problematize what it means to be an American. To make her points, she uses the concept of “conditional citizenship,” a state of partial (and revocable) acceptance/integration into American society based on factors such as race and faith. In the opening essay, “Allegiance,” Lalami writes about the frightening attitudinal changes she witnessed as a new Muslim American citizen in the wake of 9/11. Suddenly, the “slice of citizenship apple pie” she had been extended was withdrawn as hate crimes against law-abiding Muslim Americans spiked and presidential bans against certain nations eventually became a new normal. The author reminds readers how white supremacist attitudes have always existed by recalling the historical treatment of other nonwhite communities. In “Inheritance,” Lalami extends the concept of conditional citizenship to include not only nonwhites and non-Christians but also nonmales. Even in the U.S., women are often told to be grateful for the rights they have. The author convincingly argues that such attitudes “subtly discourage” women from achieving equality with men and accessing the full citizenship they deserve. In “Borders,” she goes on to emphasize the fragility of all American citizenship. She reveals how the U.S. has 136 internal checkpoints within 100 miles of its geographical borders and how the 200 million Americans living in those zones could be subject to deportation if they “fail to persuade [border patrol] agents” that they are citizens. While walls may seem to offer security, as Lalami points out, the climate change that “unfettered industrialization” has created will eventually render both walls and checkpoints useless. Consistently thoughtful and incisive, the book confronts the perils of our modern age with truths to inspire the coalition-building necessary to American cultural and democratic survival.

A bracingly provocative collection perfect for our times.