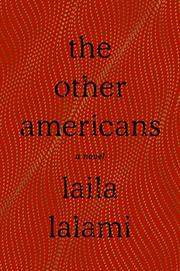 A hit-and-run in the Mojave Desert dismantles a family and puts a structurally elegant mystery in motion.

In her fourth book, Lalami is in thrilling command of her narrative gifts, reminding readers why The Moor’s Account (2014) was a Pulitzer finalist. Here, she begins in the voice of Nora Guerraoui, a nascent jazz composer, who recalls: "My father was killed on a spring night four years ago, while I sat in the corner booth of a new bistro in Oakland.” She was drinking champagne at the time. Nora’s old middle school band mate, Jeremy Gorecki, an Iraq War veteran beset with insomnia, narrates the next chapter. He hears about the hit-and-run as he reports to work as a deputy sheriff. The third chapter shifts to Efraín Aceves, an undocumented laborer who stops in the dark to adjust his bicycle chain and witnesses the lethal impact. Naturally, he wants no entanglement with law enforcement. With each chapter, the story baton passes seamlessly to a new or returning narrator. Readers hear from Erica Coleman, a police detective with a complacent husband and troubled son; Anderson Baker, a bowling-alley proprietor irritated over shared parking with the Guerraoui’s diner; the widowed Maryam Guerraoui; and even the deceased Driss Guerraoui. Nora’s parents fled political upheaval in Casablanca in 1981, roughly a decade before Lalami left Morocco herself. In the U.S., Maryam says, “Above all, I was surprised by the talk shows, the way Americans loved to confess on television.” The author, who holds a doctorate in linguistics, is precise with language. She notices the subtle ways that words on a diner menu become dated, a match to the décor: “The plates were gray. The water glasses were scratched. The gumball machine was empty.” Nuanced characters drive this novel, and each voice gets its variation: Efraín sarcastic, Nora often argumentative, Salma, the good Guerraoui daughter, speaks with the coiled fury of the duty-bound: “You’re never late, never sick, never rude.” The ending is a bit pat, but Lalami expertly mines an American penchant for rendering the “other.”

A crime slowly unmasks a small town’s worth of resentment and yearning.