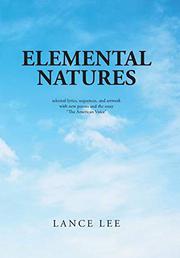 Selected Lyrics, Sequences, And Artwork With New Poems And The Essay "the American Voice"

The author’s strongest poems discuss humans’ destruction of nature in general, and the animal kingdom in particular. In “Geese,” for instance, the speaker tells of “acid rain that burns the feather, / and stinging air from great cities / that makes them fly blind,” and then asks, “Are they so dumb or so forgetful / they come and come again each year / never changing their way?” In “Dandelion,” the speaker suggests that the titular weed is “more beautiful than the storied rose” because of its resilience and ability to survive the winter. The speaker begins to value other forms of life as much as his own, concluding, “I wish you stood here, and I / flowered there.” “The World is Dying” states it plainly: “We recoil / at nature’s tooth and claw, / yet no animal kills and kills / and kills even without knowing / he kills like we kill.” In “A New Season,” Lee grapples with the consequences of such unprecedented killing in climate change, noting that we all will become “strangers on our own ground.” Near the end of the collection, “The Oranges of Guimaraes” suggests that perhaps humans are not as special and central to the ecosystem as we once believed. With hundreds of poems to shuffle through, in ekphrastic and naturalistic styles, readers are bound to find several that resonate, and at least one or two that truly linger. Overall, Lee manages to make this collection of old and new poems feel urgent and up-to-the-minute as it rushes toward a vital point. It’s an interdisciplinary set of works that effectively considers the havoc that people have wreaked on living things—including themselves.

An unsettling and necessary read for environmentalists and fans of naturalist poetry.