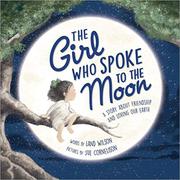 THE GIRL WHO SPOKE TO THE MOON

Awakened one night by a noise, Sofia finds her gaze following a beam of light to the Moon’s winking eye, and they chat. “From this night on, a friendship grew / into a bond both strong and true.” Later, Sofia, presented with a light complexion and dark hair and eyes, notices the Moon is sad and wants to help. She follows the Moon’s suggestion and visits the Moon in a dream. As Sofia looks from the Moon toward Earth, Moon explains that Mother Earth is her “closest relative,” but Earth’s “people seem so unaware / that what Earth needs is better care.” Moon suggests simple things everyone can do to take care of Mother Earth, and Sofia makes “a pledge of things to do / like passing on these words to you.” While the often forced rhyme is light on specifics, backmatter defines air, land, and water pollution, then presents a bulleted list of everyday activities that can help keep “Earth clean and healthy.” Sidebars in the backmatter include insightful reflections from male and female astronauts who witnessed planet Earth from space. Realistic illustrations mostly in neutral creams and grays capture the “pearl” and “opal glow” of Sofia’s moon but may not capture the attention of young readers.

Young activist dreamers will appreciate the new perspective and environmental call to action.