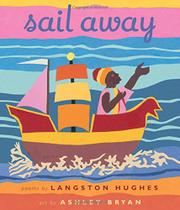 “Literature is a big sea full of many fish. I let down my nets and pulled. I’m still pulling.” Thus ends Langston Hughes’ autobiography, The Big Sea (1945), and here begins the subject of Bryan’s compilation. He chooses both familiar poems, such as “The Negro Speaks of Rivers,” and less-well-known ones, such as “Sailor,” to explore all things aquatic, both domestic and international. Reflecting Hughes’ adventures seeing the world via its waterways, the poems feature mermaids, waves, bridges, meeting merchants from all over, and more. Bryan’s intricate and colorful cut-paper collage illustrations breathe new life into the poems. The artist also pays homage to his mother, including photographs of her sewing and embroidering scissors on the endpapers—the same scissors he used to cut the images for these illustrations. Readers don’t have to have ever heard Bryan’s unforgettable, theatrical recitation of “My People” or other Hughes poems to understand the depth of the artist’s appreciation of and admiration for Hughes and his poetry: he opens the poems up visually here in the same way that he opens them auditorily when he performs them live.