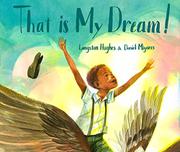 THAT IS MY DREAM!

A quietly powerful picture book that Hughes himself would have adored.

Like Charles R. Smith’s My People and E.B. Lewis’ The Negro Speaks of Rivers, Miyares’ rendition of Hughes’ famous poem connects intimately with children’s lives. In the illustrations alone, Miyares creates the story of a little suspenders-wearing African-American boy who travels to town in the back of the bus with his mother and sister, at the same time developing a mutual interest in a little white boy who rides in the front of the same bus with his mother and sister. The boys sneak glances at each other while on the bus, walking in town, and drinking from water fountains labeled “WHITES ONLY” and “COLORED ONLY.” That evening, Dad joins the black family for a picnic. A brown sparrow lands on the boy’s finger, prompting a turn in the realistic narrative. The line “That is my dream!” initiates the fantasy. As the sun sets, the two sets of siblings ride on colorful birds (sparrow, goldfinch, bluebird, and cardinal): “Dance! Whirl! Whirl!” together in the sky. Miyares’ historically situated watercolor illustrations perfectly capture the tensions of racial segregation, contrasting them against the joy and peace that come from the freedom for all children to make friends who don’t look like them.