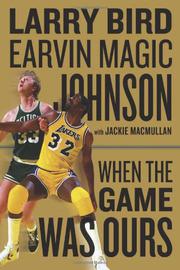 WHEN THE GAME WAS OURS

NBA legends Bird and Johnson, fierce rivals during their playing days, team up on a mutual career retrospective.

With megastars LeBron James and Kobe Bryant and international superstars like China’s Yao Ming pushing it to ever-greater heights of popularity today, it’s difficult to imagine the NBA in 1979, when financial problems, drug scandals and racial issues threatened to destroy the fledgling league. Fortunately, that year marked the coming of two young saviors—one a flashy, charismatic African-American and the other a cocky, blond, self-described “hick.” Arriving fresh off a showdown in the NCAA championship game in which Johnson’s Michigan State Spartans defeated Bird’s Indiana State Sycamores—still the highest-rated college basketball game ever—the duo changed the course of history not just for the league, but the sport itself. While the pair’s on-court accomplishments have been exhaustively chronicled, the narrative hook here is unprecedented insight and commentary from the stars themselves on their unique relationship, a compelling mixture of bitter rivalry and mutual admiration. This snapshot of their respective careers delves with varying degrees of depth into the lives of each man and their on- and off-court achievements, including the historic championship games between Johnson’s Lakers and Bird’s Celtics, their trailblazing endorsement deals and Johnson’s stunning announcement in 1991 that he had tested positive for HIV. Ironically, this nostalgic chronicle about the two men who, along with Michael Jordan, turned more fans onto NBA basketball than any other players, will likely appeal primarily to a narrow cross-section of readers: Bird/Magic fans and hardcore hoop-heads.

Doesn’t dig as deep as it could, but offers a captivating look at the NBA’s greatest era.