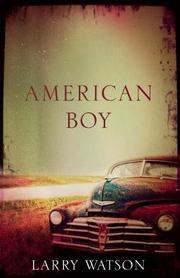 Watson's (Montana 1948, 1993, etc.) sixth novel resonates with language as clear and images as crisp as the spare, flat prairie of its Minnesota setting.

Matthew Garth's father died when Matt was a young boy, leaving him to be raised, or watched over as he raised himself, by a withdrawn, hard-working waitress mother. But Matt has a second family, the Dunbars, parents of his best friend, Johnny. Rex Dunbar is Willow Fall's most prominent physician, and his passion for medicine fascinates Matt and Johnny, high-school seniors. Dunbar often allows them to follow along as he carries out his practice, always offering instructions about medicine's basics. It is Thanksgiving 1962. Kennedy is president but all that is Willow Falls is evocative of Eisenhower and Father Knows Best. The Dunbars, with Matt, are celebrating when word comes that young Louisa Lindahl has been shot by her boyfriend and has gone missing. The boys are sent to help search. Dr. Dunbar prepares his clinic. Louisa is discovered by other searchers, and when the boys return, Dr. Dunbar has completed surgery. The boys are curious about the nature of a gunshot wound, and as Dunbar lifts the sheet from the unconscious woman to explain his abdominal surgery, Matt catches a glimpse of her breasts. Matt is captivated, and with that, a vivid story of sexual tension, family loyalty and betrayal unfolds. Matt wants Louisa, mysterious and thoroughly erotic, everything high-school girls are not, and since her lover and assailant committed suicide, he believes he can have her. Louisa is also a manipulative opportunist. After she is given shelter by the Dunbars, she quietly sets out to seduce the doctor, determined to "…advance her station in life through imitation and force of will." The introspective, insightful and reflective narrative unfolds from Matt's adult perspective, easily inferred early but not confirmed until the conclusion.

A literary tale chronicling the painful struggle required of a boy to birth himself as a man.