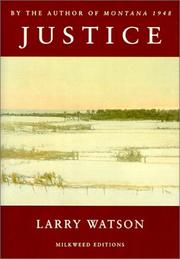 A prequel to Montana 1948 (1993), once again centered on the Hayden family of Montana, though this time the focus broadens beyond a small-town sheriff and his bad brother to explore the theme of justice in a series of intimate short stories. The collection is notable for its unrelenting tension, the result of texture and detail more than plot or conflict. The striking novella that opens the volume, ``Outside the Jurisdiction,'' shows brothers Wesley and Frank Hayden, sons of sheriff Julian, setting off with two no-accounts in 1924 for a town outside their father's jurisdiction. At a local cafe the boys—or at least the no-accounts—harass two Indian girls; the local sheriff humiliates them with ad hoc justice before sending them home. The next story, ``Julian Hayden,'' moves the action back to 1899, when their father arrived in Montana and began homesteading with his widowed mother and sisters; when one sister is overworked by a minister in another town, Julian takes justice into his own hands. Moving ahead seven years to 1906, ``Enid Garling'' tells the story of Julian's wife; she thwarts her possessive father by marrying Julian. ``Thanksgiving'' captures the family in 1927, when the sons return from college for the holidays and Wesley begins to understand that brother Frank is not to be trusted (a major theme in Montana 1948). Of the remaining episodes, ``Len McAuley'' profiles a deputy who develops a crush on Wesley's wife, Gail, in 1935; ``Sheriff's Wife'' and ``The Visit,'' both set in 1937, chronicle Gail's disillusionment with her husband's brand of frontier justice and the birth of their son, David. Episodic, but also an intense, vivid portrait of braided lives.