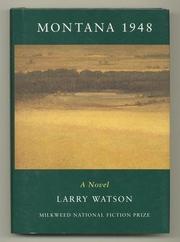 Watson (In a Dark Time, 1980), winner of the 1993 Milkweed National Fiction Prize, offers a lean, gaunt narrative rich with implication about a 12-year-old boy who witnesses the anguish of his sheriff father, who is forced to arrest his own brother for rape. David Hayden, now a history teacher, narrates the events of over 40 years ago, when his father, trained as a lawyer, was in his second term as sheriff of Bentrock, a small community of 2,000 close to the Canadian border. David's grandfather was also once a sheriff in a place where the land is harsh, the wind strong, and the sky endless. Meanwhile, David's Uncle Frank, a war hero, is a doctor, and the plot unfolds when Marie Little Soldier, the Haydens' housekeeper, falls sick. She screams when Uncle Frank treats her—then reveals that Frank has a reputation as a rapist of Indian women. David's father investigates and wrests from Frank a promise that he won't rape any more Indians. But then Marie dies unexpectedly, and David reveals information that leads his father to suspect that Frank had something to do with the death. He arrests Frank, but locks him in his own basement instead of in jail. The rest of Watson's story treats the consequences of that arrest: grandfather Hayden threatens his sheriff son, excusing the war hero uncle's sexual rapacity as normal instinct (``You know Frank's always been partial to red meat''); and Frank, after busting all the jelly and preserve jars in the basement where he's imprisoned, kills himself, whereupon the sheriff packs up his wife and son and moves away. A literary page-turner, morally complex and satisfying in its careful accumulation of detail and in its use of landscape to reveal character.