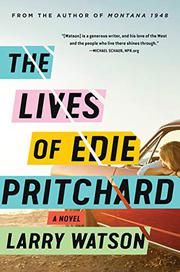 THE LIVES OF EDIE PRITCHARD

A smart, strong Montana woman struggles to define herself over decades as the men in her life try to control her.

Watson’s novel is set against the rugged landscape of Montana, the perfect backdrop for a story about a woman who spends her life running up against and away from mountains of male ego and desire. Smart and decisive but too often defined by her good looks, Edie appears at three different points in time: As Edie Linderman, a young wife to Dean, a man whose twin brother is drawn to and obsessed by her; as Edie Dunn, caught in a volatile marriage to a jealous second husband and mother to an unhappy teenage daughter; and as Edie Pritchard, a 60-something grandmother still trying to live on her terms but imposed upon by family and the past. As they do to all of us, outside forces buffet Edie’s peace of mind and forward momentum. In each segment, she faces conflict: an ugly random encounter with strangers and the inexplicable behavior of men; a tragic premature death; a threatening young man who underestimates who she truly is. Watson is insightful in his depiction of Edie and those who seek to control her, and his descriptions of small-town Montana life, where guns are frequently a menacing presence, reflect how the potential for violence is ever present beneath the surface of things. The novel crackles with tension, especially the second and third acts; Watson is a born storyteller, and it shows on every understated page. But Edie's story also rings with a hardscrabble poetry. “You might be out here alone someday with what you thought would be your life,” Watson writes. “And a gust of wind might blow your heart open like a screen door. And slam it just as fast.” What truly lies in Edie’s heart? That’s what she aims to find out.

A riveting and tense examination of identity, violence, and female anger.