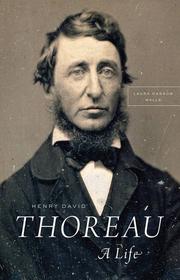 A superbly researched and written literary portrait that broadens our understanding of the great American writer and pre-eminent naturalist who has too long been regarded as a self-righteous scold.

“A writer should have the precision of a poet and the imagination of a scientist,” wrote Vladimir Nabokov. In Henry David Thoreau (1817-1862), this formulation finds its fullest expression, and that’s only part of the story. Besides being a great prose stylist and the spiritual father of environmentalism, he was also the author of “Civil Disobedience,” which has served as a rallying cry for nonviolent protests ever since. For all that, he's hardly a beloved figure; he's the hermit of Walden Pond, the Concord solipsist sneering at the lesser mortals who lack his independence. In this magnificent new biography, Walls (English/Univ. of Notre Dame; The Passage to Cosmos: Alexander von Humboldt and the Shaping of America, 2009, etc.) effectively humanizes her subject. The man who will always be regarded by some as the great prig of American literature was deeply involved in 19th-century life. He worked every day, and not just as a relentless writer; he made his living as a handyman, carpenter, expert surveyor, and businessman who helped run his family’s pencil-manufacturing company. His friendships, most notably with Ralph Waldo Emerson and others in the transcendentalist movement, were tumultuous but enduring. He was a popular lecturer and an anti-slavery activist. He was also the literary artist who spent nearly a decade trying to describe a year on Walden Pond. The Thoreau on the pages of Walden, writes Walls, “is not the author who so carefully staged the book, but the book’s protagonist, who, in the course of the year and a day, is utterly changed by the experience.”

Thoreau has inspired so many esteemed biographies that it's difficult to claim any new one as definitive. However, Walls delivers a sympathetic and honest portrait that fully captures the private and public life of this singular American figure.