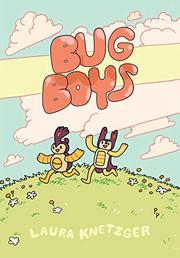 From the Bug Boys series, volume 1

Rhino-B is a bold rhinoceros beetle who lives with his BFF, a stag beetle named Stag-B, in their charming mushroom home in Bug Village. In a series of vignettes, the duo experience their world by visiting the Insects’ Library, maintained by their friend Dome Spider; helping a neighboring beehive to obtain a lost crown from treacherous termites; and exploring the Deep Dirt Cave with Dome Spider and finding themselves in a bizarrely psychedelic moment. The beetles’ exploits may be unusual, but their friendship and its dynamics are familiar. While episodic, their adventures are low-key, with a meditative feel and an emphasis on staying focused in the present; one night, as the bugs gaze into the night sky, reflecting on anxieties around growing up, Stag-B sagely asserts, “The Earth is big and life is long. Just appreciate where you are now.” Readers looking for fast pacing or plot-driven works may be put off by the insistent introspection, but it will hit the spot for quieter readers. Knetzger’s background as a storyboard artist for the cartoon Adventure Timeis highly visible, sharing its playfully absurdist feel throughout and even its dreamy pastel-hued aesthetic (supplied by Lynde). Rhino-B and Stag-B both identify as male.

A whimsical rumination on friendship and being present in the moment.