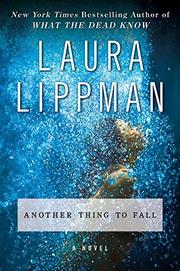 ANOTHER THING TO FALL

From the Tess Monaghan series, volume 10

An early morning rowing accident lands Baltimore PI Tess Monaghan (No Good Deeds, 2006, etc.) what may be the worst job of her life.

When a film crew’s motorboat upends her scull into the Patapsco, Tess Monaghan gets more than a good dunking. She also gets the untempting offer of a job as bodyguard to Selene Waites, bratty young star of the TV show Mann of Steel, the saga of a steelworker who time-travels in order to woo 18th-century Baltimore belle Betsy Patterson. Anorexic Selene doesn’t have much body to guard, and the stalker who took creepy pictures of her killed himself. The only reason Tess even considers head writer Flip Tumulty’s proposition is the hope of snagging some work on the show for Floyd Jupiter, a former street kid who, absent gainful employment, is fast reverting to his evil ways. Even when Floyd is stuck with the job of unpaid intern and a womanizing writer calls Tess an asshole, the work still seems worth her while—at least until whoever’s pulling a series of annoying pranks, like putting hair remover in the male lead’s face cream, takes it a step too far, and a production assistant ends up dead.

Like lunch at Atwater’s, Tess’s latest leaves you fully satisfied but looking forward to next time.