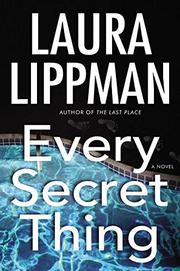 The creator of Tess Monaghan (The Last Place, 2002, etc.) crosses over in a chilling study of mothers, daughters, love, and murder.

It sure wasn’t what her wealthy parents had in mind when they sent her to study art in Baltimore, but Helen Manning thought single motherhood would be a kick. Too bad her job as an art teacher hadn’t paid enough to buy a pool membership, forcing 11-year-old Alice to spend summers playing with public-school kids like Ronnie Fuller. Some days Ronnie was Good Ronnie, some days she was Bad Ronnie. One day, when they got sent home early from a pool party for misbehaving, Ronnie and Alice found Olivia Barnes, left asleep in her carriage on the porch by a careless babysitter. Now that they’ve been released, seven years later, by the juvenile-justice system for their unthinkable part in her murder, Olivia’s mother, Cynthia Barnes, breaks her part of the plea bargain arranged by Sharon Kerpelman, Alice’s public defender, stipulating that the names of the accused minors would never become public. Cynthia, daughter of one of Baltimore’s most revered black judges, feels she has to protect her new baby Rosalind, conceived even as she mourned Olivia’s loss. So when three-year-old Brittany Little disappears from Value City while her less-than-swift mother Maveen turns her back “for just a minute,” Cynthia calls not only county detective Nancy Porter, but ambitious Beacon-Light reporter Mira Jenkins, who’s dying to get back downtown after being rusticated for failing to check a story that was an obvious hoax. Hunted by press and police alike, Alice and Ronnie cross paths once more in a struggle to keep secret what just may turn deadly.

Lucid, tight, and compelling. It’s Lippman’s gift to show the Good Ronnie and Bad Ronnie in every one of her characters, leaving no one unscathed and no one unredeemed.