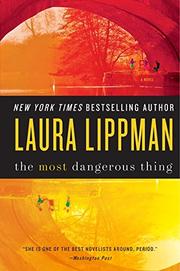 THE MOST DANGEROUS THING

Childhood playmates can’t quite put their past behind them in Lippman’s tale of growing up too fast but not at all.

Like the five points of the star Go-Go Halloran can’t get the knack of drawing, Go-Go, his brothers Tim and Sean, Gwen and Mickey seem joined even though each points in a different direction. Tomboy Mickey hates school, loves the outdoors and is neglected by her mother, a waitress with a taste for the wrong men. Pudgy Gwen worries that she’ll never be attractive, and once she is, worries even more that she’ll turn into her beautiful, sad mother Tally. Tim is a bit of a lout, Sean is the perfect gentleman, but neither gets much attention because their hyperkinetic younger brother Gordon, known to everyone in Dickeyville as Go-Go, snatches up every bit of the family’s limited resources. Still, the five travel in unprecedented freedom throughout nearby Leakin Park, even though grown-up Gwen would never let her daughter Annabelle spend hours on end out of the sight of any adult. They hike, catch tadpoles and discover a strange man living in a ramshackle cabin in the heart of the park. But their greatest adventure is being together until disaster tears them apart. Years later, Go-Go’s funeral reunites them briefly. Mickey has reinvented herself as McKey, a fearless flight attendant. Sean lives in Florida with his quietly domineering wife Vivian. Tim lives nearby with affectionate Arlene and takes care of his widowed mother Doris. But it’s Gwen, the journalist, teetering on the brink of her second divorce, who forces them to reexamine their assumptions about their shared and broken bond. No one explores the delicate interplay between children and the adults they grow into better than Lippman (I’d Know You Anywhere, 2010, etc.).