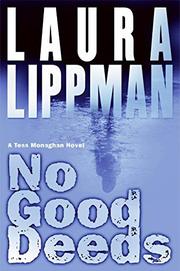 From the Tess Monaghan series, volume 9

Trying to save the world one boy at a time buys a world of trouble for private eye Tess Monaghan and her boyfriend Crow.

Not content with delivering fresh produce to every soup kitchen in Baltimore, Edgar “Crow” Ransome offers homeless 15-year-old Lloyd Jupiter, whom he suspects of running the old I-don’t-know-who-slashed-your-tire-but-for-five-bucks-I’ll-help-change-it scam, a bed at the Roland Park bungalow he shares with Tess. The teenager gives Tess the willies, especially since he seems to know something about Gregory Youssef, the assistant U.S. Attorney found dead on the Howard County side of the Patapsco River the day after Thanksgiving. After smashing up Crow’s Volvo, Lloyd bolts, but Tess tracks him down and forces him to tell what he knows about Youssef’s murder to Marcy Appleton, a young Beacon-Light reporter who deserves a break. How can she know that Youssef’s colleague Gabe Dalesio is also looking for a break in the case? Along with Barry Jenkins of the FBI and Mike Collins of the DEA, Gabe will use any threat available to get Tess to name her source—even if outing Lloyd would drastically reduce his shelf life. So while the Feds lean on Tess, Crow hides Lloyd in Delaware, where no one would ever look, counting on Tess’s resourcefulness and his own luck to stave off disaster.

After Lippman’s crossover stint (To the Power of Three, 2005, etc.), Tess is better than ever.