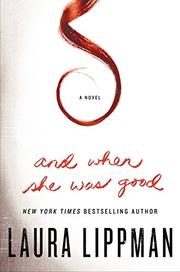 AND WHEN SHE WAS GOOD

Lippman (The Most Dangerous Thing, 2011, etc.), who specializes in tales of feckless parents and their luckless kids, puts a madam at the center of her latest dysfunctional family.

At first, nothing could be more conventional than the Lewis family saga. Helen’s father, already married with two children to his credit, knocks up her mother, Beth, a 19-year-old carhop. He moves in with Beth but hangs around his ex-wife Barbara enough to give Helen a half sister, Meghan, only six months younger. As Beth and Barbara tussle over worthless Hector, he focuses on tormenting Helen, telling her that she has “a nothing face,” breaking her record albums and forcing her to get a job that interferes with her schoolwork. It’s while waitressing at Il Cielo that she meets Billy, the owner’s stepson, who lures her to Baltimore with promises of marriage. Instead, he turns her out, making her earn money to feed his drug habit by doing lap dances at a local strip club. That’s where she meets Val Deluca, whose red hair matches his fiery temper. Val offers Helen a nice house and a better class of client, all for doing what she’s already doing. He also gives her the chance to be something she’d never dreamed of: a mother. That’s when Helen’s tale goes off the beaten path. Before he learns about Helen’s delicate condition, Val is jailed for murder, and Helen reinvents herself as Heloise Lewis, running the business at a level Val had never achieved. She recruits college girls with delicately worded ads for escorts and serves clients who include state legislators, all while presenting herself as a lobbyist for the Women’s Full Employment Network. But when another suburban madam turns up dead, Heloise realizes that the safe, comfortable life she’s crafted for herself and her beloved son, Scott, in affluent Turner’s Grove is at risk.

Like Mary Cassatt, Lippman studies families with a different eye than her male contemporaries, showing the heartbreaking complexity of life with those you love.