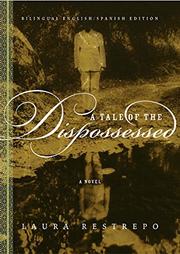 A TALE OF THE DISPOSSESSED

The fourth from Colombian Restrepo (The Dark Bride, 2002, etc.) traces an unlikely romance between a displaced man—raised in the hell of the country’s decades-long civil war—and an outsider.

The nameless narrator (presumably from the US) meets the man known as Three Sevens in the refugee shelter where she works. She is attracted to him, but he speaks only of a woman named Matilde Lina. The mysterious man, she learns, was born in 1950, in Santa Maria Bailarina, a village named after its patron saint, the Dancing Madonna. Found on the church steps, the infant had an extra toe (hence Three Sevens, after twenty-one digits), which signals something supernatural. He’s taken in by the village laundress Matilde Lina, and, after a massacre a few months later, the survivors take to the road, carrying the wooden sculpture of the Dancing Madonna with them for protection. The slow march lasts for years. “We were victims, but also executioners,” Three Sevens admits. He and his young adoptive mother are the only travelers who seem oblivious to the sufferings of hunger, fear, and cold nights. When he is 13, the two are separated during an ambush, and, putting the Madonna in his backpack, he begins a lifelong search for the only woman he has ever loved. Years later, in the oil city of Tora, he’s caught up in a riot, tear-gassed, beaten, labeled an instigator, and accused of stealing the Madonna, a valuable colonial relic. Still seeking Matilde Lina, Three Sevens finds a refugee shelter run by French nuns high in the mountains above Tora—a place on “the other side of reality.” There, the Dancing Madonna, disguised in a new mantle, is restored to dignity, and Three Sevens, after nearly fifty years, has a chance at redemption and love.

Vividly detailed, a florid fantasy that suggests the miraculous potential of hope and love in the midst of perpetual war.