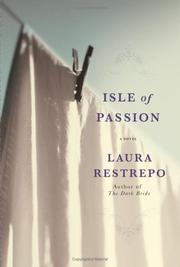 The Colombian author’s previously untranslated 1999 debut novel is arguably her best: a ripping yarn that recreates an obscure historical incident.

In 1908, half-French Mexican Army officer Ramón Arnaud, who had been disciplined and cashiered for insubordination and cowardice, was sent to act as lieutenant governor on remote Clipperton Island. That outpost—named for a notorious English pirate who had sheltered there (and previously dubbed “Isle of Passion” by the celebrated voyager Magellan)—though ostensibly vulnerable to attack by France, is only a barren wasteland: a volcanic atoll virtually bereft of tillable soil, ringed by perilous underwater coral reefs and far from civilization, in the northern Pacific Ocean off Mexico’s western coast. Restrepo’s increasingly engaging narrative juxtaposes the Arnaud party’s ordeal (late-arriving supply ships, a catastrophic hurricane, a plague of scurvy that decimates the island’s small populace, the consequences of failed escape attempts) with a nameless journalist’s efforts, two centuries later, to interview the Clipperton adventurers’ surviving relatives, and thus piece together a separate history virtually ignorant of (though profoundly affected by) the Mexican Revolution, World Wars and the inevitable seepage of fact into legend. The story drags initially, as the narrative structure painstakingly reveals itself. But Restrepo energizes it with persuasive characterizations of conflicted, intermittently megalomaniacal Ramón, his courageous wife Alicia (who ultimately becomes the islander’s savior) and two splendidly imagined antagonists: German hydraulics engineer Gustav Schultz (engaged by a company that processes the Clipperton birds’ rich guano deposits), and the island’s own Caliban, lighthouse keeper Victoriano Alvarez, who rises eerily from the dead, tests the resourceful Alicia’s wits and will and precipitates a climactic battle that threatens her comrades’ last hope of rescue and survival.

Improbable, sure, but that’s not a bad thing in a historical romance this vivid and entertaining.