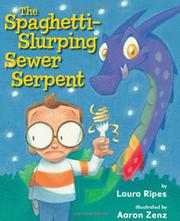 When Mom scrapes the family's uneaten spaghetti into the sink, young Sammy Sanders hears strange slurping sounds. He becomes "77 percent convinced" that a spaghetti-slurping serpent lives in his sewer, and can't get to sleep. The next morning, Sammy and his little sister Sally investigate. There are meatballs and strands of limp spaghetti around the manhole cover! Sammy, whose round glasses make the whites of his eyes look as enormous as an owl's, can barely contain his excitement. After he removes the cover, Sally slips on some sauce and lands in the sewer, becoming a smelly sludgy mess. Sammy's left to investigate alone and comes up with a brilliant idea. Late that night, he sneaks out of the house with a salty snack for himself and a bowl of spaghetti for the serpent. But he falls asleep, and the huge serpent slithers up to the scrumptious spaghetti. Slurping sounds startle Sammy awake; he's face-to-face with the monster. There's just one thing to do: Share! Sammy' salty snack earns him a friend for life. And that night, he sleeps soundly, 100% sure that there's a serpent in his sewer. Zenz's illustrations, in Prismacolor colored pencil, look generic, but Ripes' yarn has pace and phonetic crackle.

Fun enough once through, but not much more.