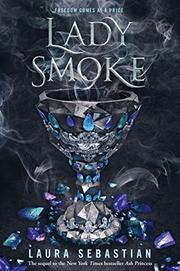 From the Ash Princess series, volume 2

A rebel queen fans the sparks of revolution.

Picking up immediately after the events of Ash Princess (2018), Sebastian’s expansive sequel finds young Queen Theodosia—her title newly reclaimed—fleeing her country and throne. With her people still enslaved, Theo will need allies and an army to free them, and her aunt, the fierce and manipulative pirate Dragonsbane, insists that the only way to acquire either is if Theo marries—something no queen has ever done in Astrea’s history. Wracked by nightmares, guilt, and fear that she is losing herself (and more), Theo balks but, with few options open to her, grudgingly agrees to meet with suitors at a grand invitational hosted by the king of the opulent Sta’Crivero. Readers looking for further immersion and expansion of Theo’s world will not be disappointed here. The narrative suffers marginally from lengthy details picked up and soon put back down with no real service to plot or character development, but Theo’s first-person narration remains enthralling with emotional immediacy as she learns more and more about her world and the people (and cruelty) within it. Vengeance, political corruption, and mystery are the main drivers, and questions of trauma, empathy, and sacrifice hold the reigns as Theo grapples with emergent magic, inconvenient romances, and the crushing weight of her choices as a leader.

Packed to the brim with intrigue and the promise of a third installment.