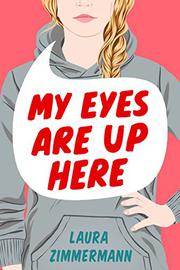 MY EYES ARE UP HERE

Greer Walsh wishes she were one person...unfortunately, with her large breasts, she feels like she’s actually three.

High school sophomore and math whiz Greer is self-conscious about her body. Maude and Mavis, as she’s named her large breasts, are causing problems for her. When Greer meets new kid Jackson Oates, she wishes even more that she had a body that she didn’t feel a need to hide underneath XXL T-shirts. While trying to impress Jackson, who has moved to the Chicago suburbs from Cleveland, Greer decides to try out for her school’s volleyball team. When she makes JV, Greer is forced to come to terms with how her body looks and feels in a uniform and in motion as well as with being physically close with her teammates. The story is told in the first person from Greer’s point of view. Inconsistent storytelling as well as Greer’s (somewhat distracting) personified inner butterfly make this realistic novel a slow but overall enjoyable read. The story contains elements of light romance as well as strong female friendships. Greer is white with a Christian mom and Jewish dad; Jackson seems to be white by default, and there is diversity among the secondary characters.

A sweet, slow-paced novel about a teen learning to love her body.