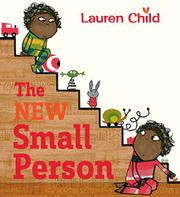 “Elmore Green started off life as an only child, as many children do,” opens the wry text. Accompanying art depicts a brown-skinned boy with tousled black hair, wearing photo-collaged knitwear and grasping his bedroom doorknob. At first, his room remains his own, even when “the new small person” arrives, and Elmore’s upset arises not from sharing either space or things, but from insecurity. He worries that his parents and others might like the baby “a little bit MORE than they liked Elmore Green.” Such concerns don’t foster affection, and Elmore sees even more reasons to remain leery when his brother begins copying him, following him around, interfering with his things and (horrors!) sharing his bedroom. This last development, however, provokes brotherly love when Elmore has a nightmare and his brother crawls into his bed to soothe him. It’s a pleasing twist on typical stories about sibling rivalry, in that the little brother’s actions change the dynamic rather than vice versa. Shared activities and playthings strengthen their bond, resulting in a happy ending for Elmore and Albert, whose name is finally revealed upon his big brother’s change of heart.

How nice to see a familiar story made new with a family of color and a little brother as hero.