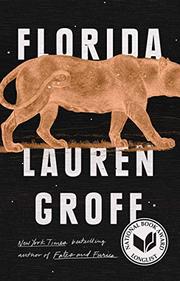 In 11 electric short stories, the gifted Groff (Fates and Furies, 2015, etc.) unpacks the “dread and heat” of her home state.

In her first fiction since President Barack Obama named Fates and Furies his favorite book of the year, Groff collects her singing, stinging stories of foreboding and strangeness in the Sunshine State. Groff lives in Gainesville with a husband and two sons, and four of these tales are told from the perspectives of unmoored married mothers of young ones. The first, “Ghosts and Empties,” which appeared in the New Yorker, begins with the line, “I have somehow become a woman who yells,” a disposition the narrator tries to quell by walking at all hours as “the neighbors’ lives reveal themselves, the lit windows domestic aquariums.” Groff fans will recognize the descriptive zest instantly. The same quasi-hapless mother seems to narrate “The Midnight Zone,” in which she imperils the lives of her boys by falling off a stool and hitting her head while alone with them at a remote cabin, “where one thing [she] liked was how the screens at night pulsed with the tender bellies of lizards.” Ditto for the lonely oddballs telling “Flower Hunters” and “Yport,” the longest and last story, in which the reckless mother is often coated in alcohol. These are raw, danger-riddled, linguistically potent pieces. They unsettle their readers at every pass. In the dreamy, terrific “Dogs Go Wolf,” two little girls are abandoned on an island, their starvation lyrical: “The older sister’s body was made of air. She was a balloon, skidding over the ground”; their rescue is akin to a fairy tale. Equally mesmerizing is “Above and Below,” in which the graduate student narrator sinks away and dissipates into vivid, exacting homelessness. Even the few stories that dribble off rather than end, such as “For the God of Love, For the Love of God,” have passages of surpassing beauty. And Groff gets the humid, pervasive white racism that isn’t her point but curdles through plenty of her characters.

A literary tour de force of precariousness set in a blistering place, a state shaped like a gun.