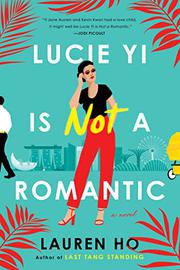 LUCIE YI IS NOT A ROMANTIC

Desperate for a baby, a single woman attempts to find a partner through a website for potential co-parents—but when feelings develop, things get complicated.

Lucie Yi knows she wants a child, but her journey to parenthood has been bumpy. After having a miscarriage, she suffers another devastating blow when her boyfriend cheats on her. She flees Singapore to work in New York City, where she can deal with her grief far away from reminders of her old life. But with her biological clock ticking louder and louder, Lucie knows she needs to act fast if she wants the baby she’s always dreamed of. The dating pool isn’t offering any potential fathers, but then she discovers Co-Family.com, a platform that one of her friends describes as “Tinder for would-be parents.” A platonic co-parenting situation is just what Lucie wants—she can’t deal with another heartbreak. When she meets Collin, she knows he’ll make the perfect father for her child. He’s willing to move to Singapore, where she wants to raise their child, and best of all, she doesn’t have any pesky feelings for him. But when she gets pregnant and they make the move back to her home country, things get complicated. Because of the intense social stigma around unwed mothers in Singapore, Lucie and Collin have to tell her parents that they’re going to get married. And then Lucie’s cheating ex, Mark, shows up. He claims he’s changed and wants to be together, but spending so much time with Collin has made Lucie realize that she might want other things. Should Lucie take the unconventional path with Collin and risk screwing up their platonic co-parenting situation, or should she fall into the safe comfort of Mark’s arms? Ho delicately balances grief, romance, and humor. There are many laugh-out-loud lines (including Lucie’s thoughts as her body changes during pregnancy), but Lucie’s sorrow over what she lost—both a baby and her imagined future—always rings true. This is best shown in a particularly touching scene in which Lucie attends a support group for grieving parents.

A beautiful exploration of both grief and romance starring a lovably hilarious heroine.