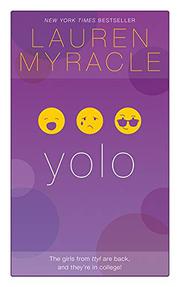 From the Internet Girls series, volume 4

Instant-messaging champs Maddie, Angela and Zoe return to hash out their first year away at respective colleges in this fourth installment of Myracle’s popular series that began with ttyl (2004).

Geographically speaking, the trio has some serious distance separating them. Thoughtful, reserved Zoe is enthralled with her classes at Kenyon in Ohio, even as she misses her boyfriend, Doug. At the University of Georgia, fashion-conscious Angela contends with a freaky roommate who seems to be stealing her stuff while she pledges to a sorority, causing her to become increasingly unsure about the Greek system. And confident Maddie, usually the one who takes charge, finds herself the odd girl out with her suitemates at the University of California at Santa Cruz. As in the first three books, the entirety of this novel is written as texts and instant messages among the young women. While there are a few instances in which this format feels a little forced—usually when a character requires more than two or three lines to sum things up—it remains an incredibly appealing narrative device. The friends’ honesty with one another, even about things like embarrassing sexual experiences and depression, is lifelike (and heartwarming, to boot), and their jargon—“fugly,” “ex-fucking-scuse me?”—will ring true to many a teen reader.

Funny, deceptively smart and just in time for those going off to college.