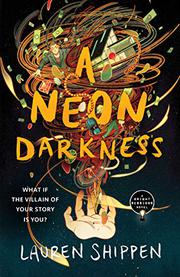 From the Bright Sessions series, volume 2

Robert can manipulate others—but he doesn’t know if that’s a blessing or a curse.

Following The Infinite Noise (2019), this Bright Sessions book tells the origin story of Damien, ne Robert, one of the podcast’s antagonists. When the book opens, Robert is an 18-year-old high school dropout and White boy with no family but all the material resources he could ever need. He has the power to make people do what he wants, or more accurately, to want the same things he wants. After arriving in Los Angeles, he falls in with a slightly older group of Unusuals with various powers who take him under their wing. Shippen combines an exciting plot with diverse characters—such as Neon, who is Black and queer, and Indah, who is Indonesian, Muslim, and lesbian—who defy stereotypes. As the group tangles with a shady organization that has kidnapped their friend, they also realize that the affection they feel for Robert might not be real. Robert’s emotional arc is interesting and unusual—he wants to be a good person, but he is selfish, manipulative, and unwilling to change. He is sympathetic while also being pitiful and contemptible and far too uncool to be an antihero. This may be the best Bright Sessions content yet as well as an excellent starting point for those unfamiliar with this world.

A creative and compelling read.