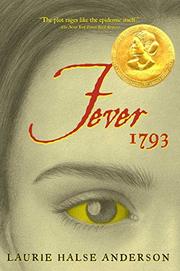 In an intense, well-researched tale that will resonate particularly with readers in parts of the country where the West Nile virus and other insect-borne diseases are active, Anderson (Speak, 1999, etc.) takes a Philadelphia teenager through one of the most devastating outbreaks of yellow fever in our country’s history. It’s 1793, and though business has never been better at the coffeehouse run by Matilda’s widowed, strong-minded mother in what is then the national capital, vague rumors of disease come home to roost when the serving girl dies without warning one August night. Soon church bells are ringing ceaselessly for the dead as panicked residents, amid unrelenting heat and clouds of insects, huddle in their houses, stream out of town, or desperately submit to the conflicting dictates of doctors. Matilda and her mother both collapse, and in the ensuing confusion, they lose track of each other. Witnessing people behaving well and badly, Matilda first recovers slowly in a makeshift hospital, then joins the coffeehouse’s cook, Emma, a free African-American, in tending to the poor and nursing three small, stricken children. When at long last the October frosts signal the epidemic’s end, Emma and Matilda reopen the coffeehouse as partners, and Matilda’s mother turns up—alive, but a trembling shadow of her former self. Like Paul Fleischman’s Path of the Pale Horse (1983), which has the same setting, or Anna Myers’s Graveyard Girl (1995), about a similar epidemic nearly a century later, readers will find this a gripping picture of disease’s devastating effect on people, and on the social fabric itself. (Fiction. 11-13)