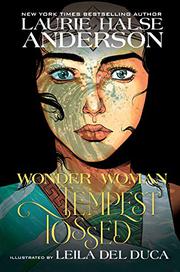 From the Wonder Woman series

Not all heroines wear capes.

Protected on the hidden floating island of Themyscira, black-haired, light-skinned Princess Diana anticipates the end of her challenging changeling phase on her 16th birthday. She desperately wants to be a warrior like the other Amazonian women. A gift to the queen from the Five Mothers, Athena, Aphrodite, Demeter, Artemis, and Hestia, Diana is different—tall but clumsy; once hale but now weak. However, outside Themyscira’s magical barrier, Diana’s agility, intelligence, strength, and compassion shine. When Themyscira is breached by mortals, Diana disobeys her mother’s command, braving the violent sea to save drowning refugees. Mistaken for a refugee herself, Diana is hustled to a camp where she witnesses the devastating effects of war and cares for the mortals. After her extraordinary abilities are recognized by a United Nations employee and his husband, who get her a student visa, Diana moves to America, where she continues to fight for the weak and finds the place where she belongs. Astutely attuned to the current social climate, the story humanely and intelligently addresses complex issues, including immigration, child trafficking, hunger, and poverty. The text and illustrations, which show brown-skinned characters with a range of skin tones and hairstyles, naturally weave in characters of different backgrounds who are not reduced to their struggles.

Will engage readers until the final battle.

(Naturalization Oath of Allegiance to the United States of America) (Graphic fantasy. 14-18)